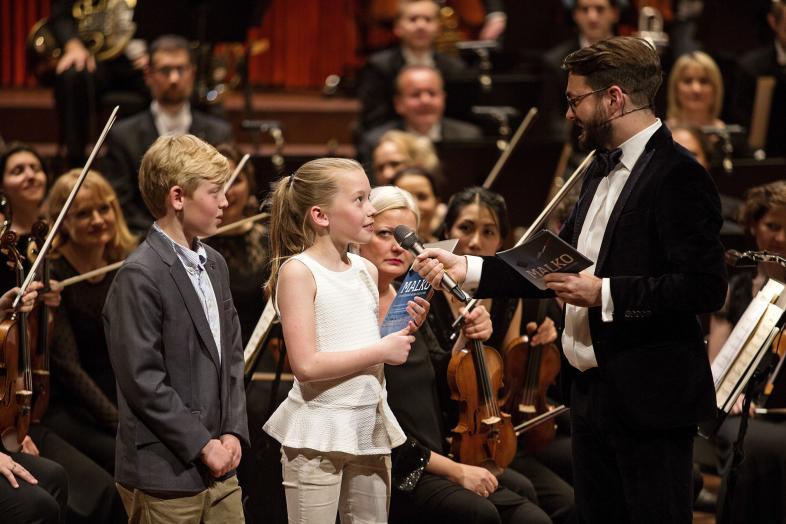 School children from all parts of Denmark will be following the Malko Competition in order to cast their vote for the special Children's Jury Prize.

In recent weeks the Danish National Symphony Orchestra has been travelling around the public schools of the country to teach the children about the work of the conductor. Later in the month the children will be voting for their favourite conductor in the Malko Competition.

On 27 April at the DR Concert Hall the final battle will be waged by the three young conducting talents in this year’s Malko Competition, which has been held every third year since 1965. But besides the award of the coveted Malko Prize, one of the talents will also have the chance to win the prize of the children’s jury.

The children’s jury consists of 45 fourth and fifth grade classes which musicians from the Danish National Symphony Orchestra have visited over the past four weeks to teach them about the work of the conductor.

The children vote electronically for their favourite conductor, whom they have seen performing in live streaming from the competition. The one with most votes will be awarded the prize by two children whose names have been drawn by lot.

Karen Skriver Zarganis has been coordinator on the project, which has taken place all over the country. She has found that the children take great interest in learning about classical music.

“What can music do to us, and how can music express the big emotions? That is what we would like to teach the children. It is up to the conductor to release the emotions that lie within classical music. This is an important task in which we would like to give the children a mini-education before they are to vote,” she says, and continues:

“In almost all the classes I was in, the involvement was great. Sometimes I didn’t manage everything I wanted to, because they were so eager to ask questions.”

The children understand the music

The teaching material consists of three modules. In the first, Karen Skriver Zarganis and the musicians from the Danish National Symphony Orchestra visited the state schools to show them how music can express emotions via exercises and videos with famous conductors. The next module is videos with the choir conductor Susanne Wendt and the Danish National Children’s Choir, who act as ‘conductor rabbits’ with simple exercises that can be repeated in class. In the last module each pupil has to make a drawing and a small story that fit with a piece of music. Then the class have to film themselves as conductors.

The first module included an exercise meant to show how the conductor communicates with the orchestra by means of facial expressions. A pupil stands at the blackboard facing away from his or her classmates and makes a facial expression that the musicians are to interpret in the music. The classmates then have to guess what face the pupil made.

Karen Skriver Zarganis says that she was pleased to see that all the children quickly understood the deeper layers in classical music; that it is not just beautiful notes put together, but that symphonies contain a story about something big.

“But they are also simply quite direct about what they like. That’s the good thing about the children’s jury. They will choose exactly the conductor who moves them in some way,” says Karen Skriver Zarganis.